The appearance, lifestyle and behavior of these marsupial animals almost do not fit into the usual notions of what real kangaroos should be like.

Soft wool of chestnut color, small round head, short hind legs, ability to masterfully climb trees – this and much more distinguishes wood kangaroos from their relatives living on the ground.

« Goodfellow Wood Kangaroo: The Tree-Kangaroo » Among his fellow-climbers, the wood kungaroo Goodfellow (Latin: Dendrolagus goodfellowi) is the prettiest. This feature was noticed by the Australian biologist Tim Flannery, who studied wood kangaroos in New Guinea for many years. That is why one of the subspecies of tree kangaroos Goodfellow Flandery gave the name Dendrolagus goodfellowi pulcherrimus, which in Latin means “the most beautiful”.

Of twelve species of tree kangaroos, ten live in the tropical forests of New Guinea, settling between plains and highland areas, and two more species migrated to the north of the Australian mainland. Woodfang Goodfellow preferred to climb higher, choosing for life the impregnable foggy forests in the southeast of New Guinea, hiding in the mazes of the Owen-Stanley mountain range at a height of seven hundred to two and a half thousand meters above sea level.

The woody way of life has left its mark not only on the appearance of Goodfellow’s kangaroo, but also on their habits and manner of movement. Their hind legs are not as long as those of ordinary kangaroos, and the forelegs, powerful with a wide sole, are provided with tenacious, curved claws.

Goodfellow wood kangaroos are not only excellent climbers, but also hardy, strong animals with durable bones. To avoid meeting their main enemy, the New Guinean harpy, they do not hesitate to jump from a height of twenty meters, while remaining completely unscathed. However, being on the ground, our heroes turn into clumsy helpless creatures. Unable to make more than two long jumps in a row, Goodfellow’s wooden kangaroos move in small steps, bouncing and pulling the trunk forward to balance the heavy tail pulling them back.

To descend to the land of tree kangaroos makes hunger: apart from the leaves, these marsupials do not mind eating green grass, flowers and even occasionally encountered juicy cereals, behind which they make distant trips to the outskirts of the forest. To digest a huge amount of cellulose eaten during the night, contained in plants, they are helped by special bacteria living in their stomach.

Returning to their native elements among the branches of trees, the kangaroos are transformed: all their movements become fast, dexterous, confident. To rise to the very crown in a matter of minutes, it is enough for them to grasp the tree trunk with their front paws, and to push back from it with short, powerful movements. For the skill of masterfully climbing tree kangaroos Goodfellow is often called “marsupial monkeys.” 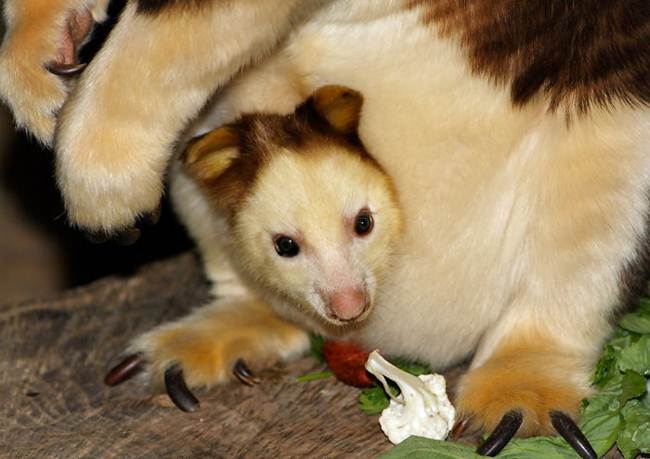 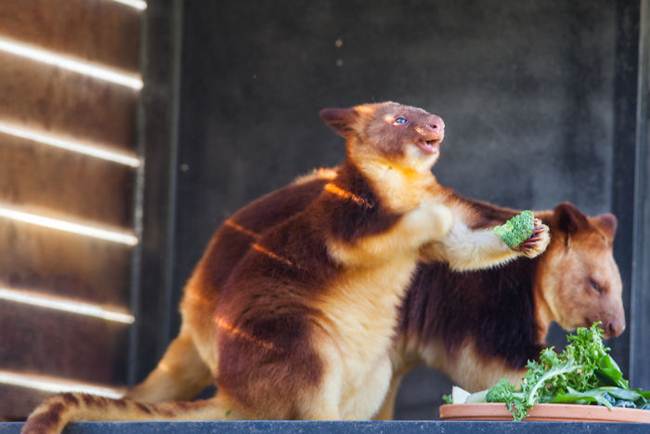