Nasa and Google announced the opening of a new planet in the “second solar system”, which resembles a “crumpled version” of the planetary system of mankind.

The space agency has teamed up with a technology company to scan the universe in search of “exoplanets” – this is the name of planets that revolve around other stars.

With the help of artificial intelligence, Google processed the old data and found the 8th planet in a remote system called Kepler-90 – it was called Kepler-90i. This is the first planetary system found in deep space, with the same number of planets as our own. Kepler-90 is a “sun-like star”, which is located at a distance of 2545 light years from Earth in the constellation of the Dragon.

What is the planet Kepler-90i?

An artist’s impression of the newly discovered world, which orbits incredibly close to its own sun

The planet is “incinerating hot” and makes a turn around its star every 14 days. It is about 30% larger than the Earth and so close to its own sun that its temperature rises to 426 degrees Celsius – enough to almost instantly burn people.

“For the first time since the planets of our solar system were discovered thousands of years ago, we know for sure that our solar system is not the only record holder in terms of the number of planets,” said astronomer Andrew Vanderburgh.

Kepler-90 can have as many planets as our own solar system, but they are completely different 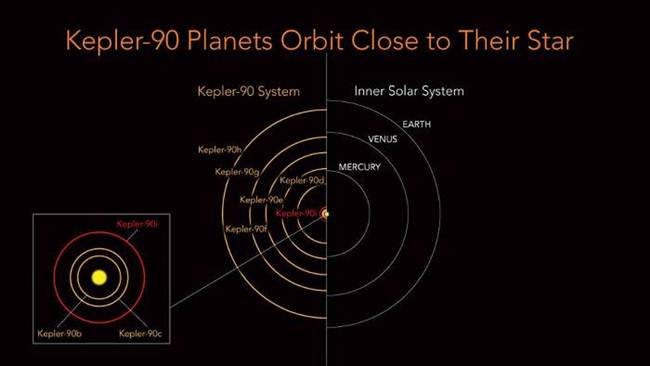 All 8 planets are located in orbit closer to their host star than the Earth to the Sun.

“The Kepler-90 planetary system is similar to the mini version of our solar system. There are also small planets inside and large outside, but everything is crushed much closer, “added Vanderburg.

What is the Kepler telescope and how do NASA and Google work together?

Kepler is a telescope designed to search for planets around other stars. Until he flew into space, we had no idea if other worlds were surrounded by other suns. With his help, scientists saw that the planets are in orbit around the stars in the universe.

“Machine learning is really brilliant in situations where there is so much data that people can not look in on their own,” said Google software engineer Christopher Schallier.

“We got a lot of false positives on the planets, but potentially more real planets,” said Vanderburg, “it’s like sifting the rock to find jewelry.” If you have a finer sieve, then you will catch more rocks, but you can also catch more precious stones”.