The Veluwemeer Aqueduct | The Road Under Water In Eastern Netherlands

Holland is a country that is largely at a level almost identical to the sea, or below its surface. For this reason, a large part of the country is full of water, but these areas need to be used as land, so it is customary in the countryside of the tulips to dry out such areas and the so-called poldrov. Well, that’s not the only problem with water in this country. Occasionally, there are situations where several separate territories need to be joined together, making it into the hands of skilled architects and builder who have to study their heads in the right technical solution.

Those who visited the Netherlands, probably visited historical places and saw many sights. And how many crossed a unique bridge connecting the coast of the mainland in the eastern part of the country.

When in 2002 a team of architects and engineers only introduced the project of the future crossing, their idea seemed insane. And yet the aqueduct Veluwemeer has won many projects of conventional tunnels and massive land overlaps. 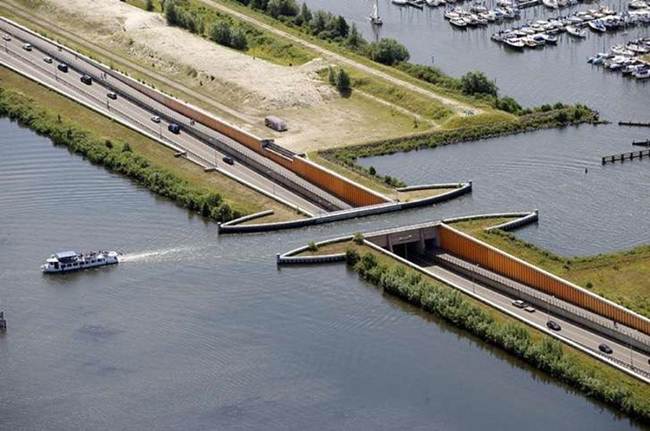 Surprisingly, its creation turned out to be much more economical not only in terms of time, financial costs, but also in terms of its capacity. Thanks to the Veluwemeer Aqueduct, which has a depth of as much as 3 meters and a width of 19 meters, the strait crosses daily around 30,000 cars a day, it does not stop boats and boats from making their routes over the busy highway.

On the sides of the water bridge there are pedestrian paths with observation platforms, walking along them, you can see a real miracle. This bridge defies the laws of physics is found in the Netherlands!