The resort architecture has always been a territory of freedom for Soviet architects. Ever since the Stalinist era sanatorium functioned as Soviet “paradise on earth” – the place where they were to strive to get all workers. Therefore, even in the days of struggle against the excesses of the various agencies do not skimp on building palaces for the rest of their employees, and resort construction enables architects to get away from the general line.

So in 1980, the Soviet Union and Czechoslovakia trade union leadership decided to build a joint boarding house “Friendship” in the Crimea for the working people of the two countries. Czechs wanted to pension was located in a place where they took a romantic youth – on the Golden Beach. But in those years has been built on the coast, there was only a narrow piece of territory with a 40-degree slope between the road and the sea … 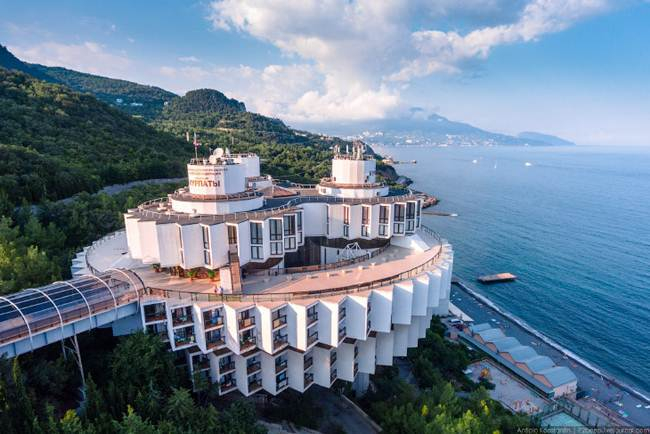 Photos and text by Konstantin Antipin

1. The place was very unfortunate. In addition to the landslide, there turned out to be a tectonic fault and 8-point seismic activity. But after reaching the architects of the agreements only notified about the selection and instructed to begin the development of the project. Build in the usual way is, of course, it was impossible, architect and engineer Igor Vasilevsky Nodar Kancheli decided to use a system in which the object is to minimally touched the sloping terrain. Here’s how to describe Vasilevsky path selection:

“We had to choose the most stable system. It was “stool” on three legs, where all support evenly loaded. This was the basis of the structure. All that is in the building – floors, transverse, longitudinal walls – all included in the job. The design solution with no carrying and carried elements – a stroke of genius. “

Thus, the entire load of the building – a ring-shaped candy bar – has concentrated and passed through three rock tower support. The area of support on the ground at a minimum (the ring 9 meters in diameter and wall thickness of 80 to 20 cm).

1. For the sake of the slope and vegetation object off the ground, so that its image is associated with a flying saucer .

2. In fact, the architect, there are two ways of interaction construction with the surrounding nature. First – somasshtabnymi environment, greenery and the inclusion of a person object in the landscape. The second – an attempt to physically preserve nature, severing an object from the ground. 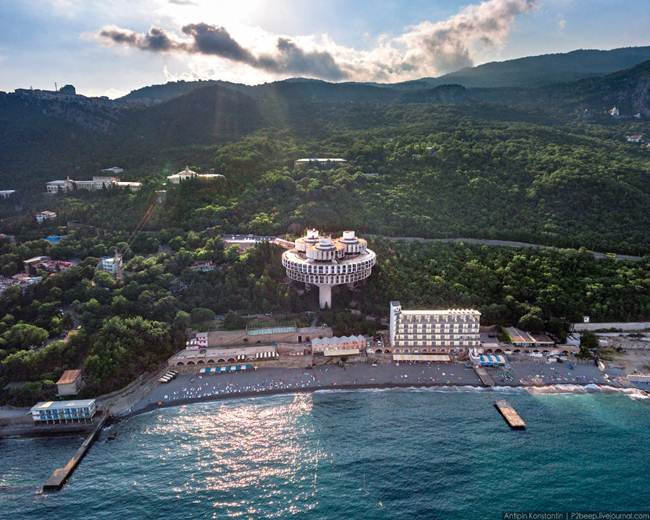 3. The second option is typical for structures with complex geological conditions and terrain. Hence, such an unusual form of “Friendship.” The diameter of the two-part ring, which consists of residential rooms – 76 meters. It does not rely on the support, and touching, as it glides over them, creating the illusion of floating.

4. Hotel rooms brought to the outer annular path with the opening of the sea. 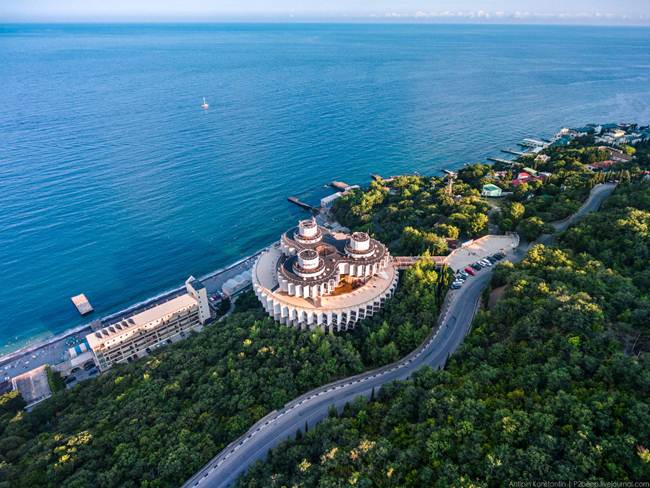 5. “In the 56-meter drop from the top of the access road to the beach, another entrance and approach not. Enter the object can only be through the roof, which was done. You get out of the covered glazed transition to the upper terrace with a spectacular opening to the sea horizon … “- says architect Igor Vasilevsky.

7. Due to the shape of the gear, from almost every room can see the sea and the piece is not visible neighbors.

8. At the top of the building there is a three-part console restaurant. 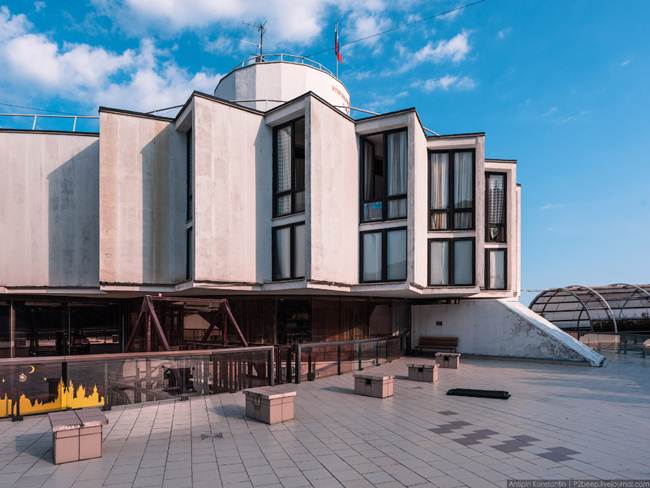 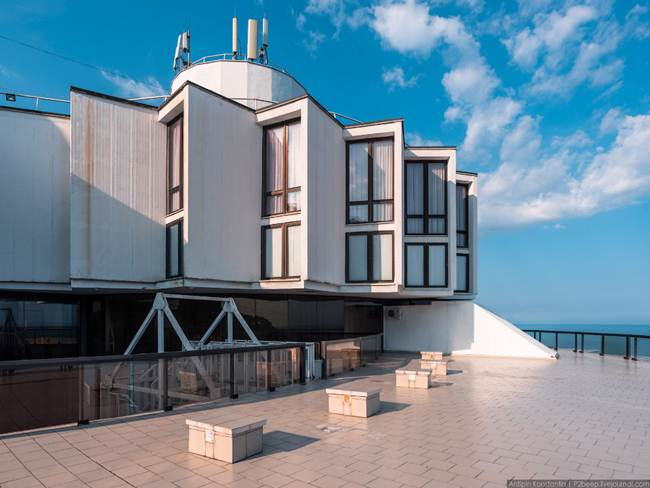 10. On top of the building resembles a gear system which have been put on top of each other. 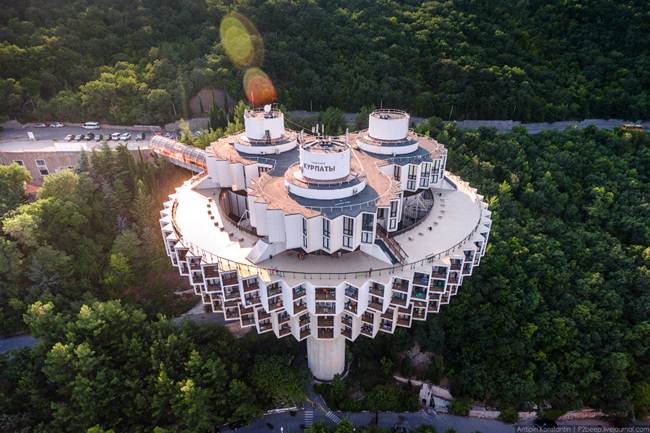 12. The main entrance to the resort is located at the access area on the fifth floor. 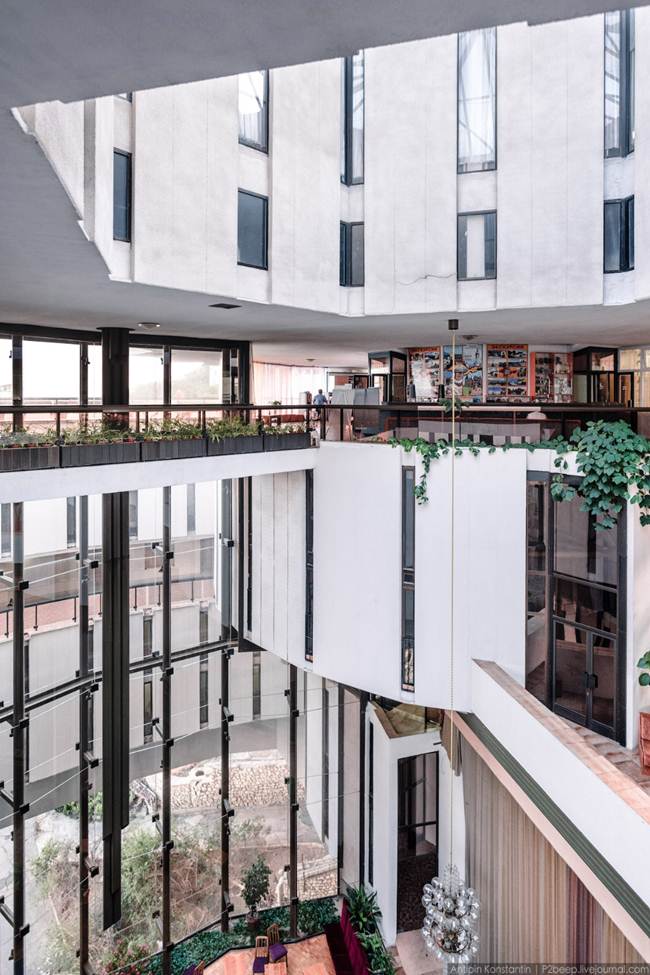 13. The light here falls through a glass dome in the roof. 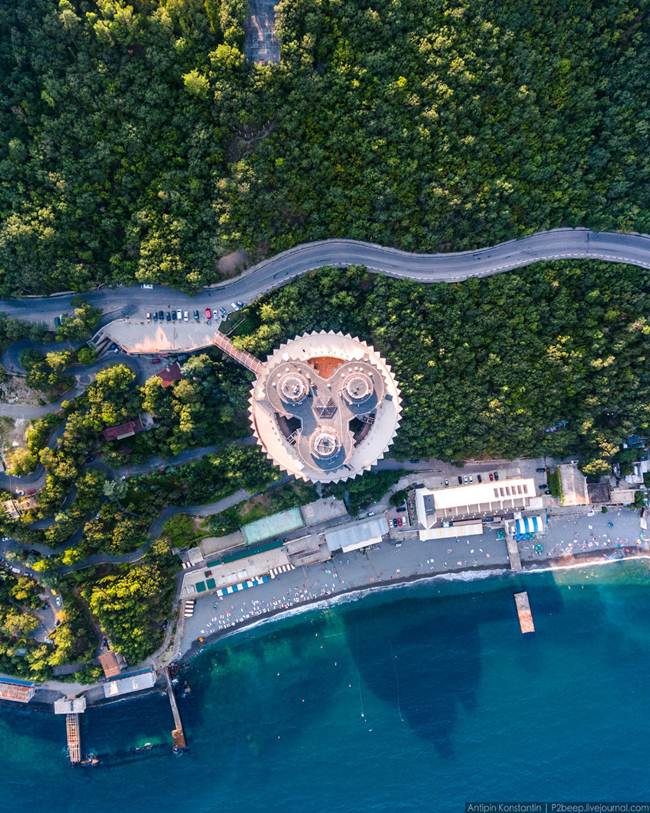 14. In addition to the sun, there is electric light, coming from a very unusual lamps and chandeliers.

15. The basis of object – a crystal atrium , in which focused public spaces: a concert hall with a lobby, cafe, dance floor, billiards. All this is based on the “drop” of sea water – bowl basin, hanging on to the three pillars. It can be seen through the glass floor in the Triangle. And the this triangle – light and music fountain. In the evening it is very nice.

16. Even after 30 years, the interior looks incredible.

17. Attention to detail carries resting in Space Soviet future, how it was represented in the science fiction magazines of the eighties.

18. Between the housing ring and a glazed atrium are open courtyards, creating an expressive multipart composition. 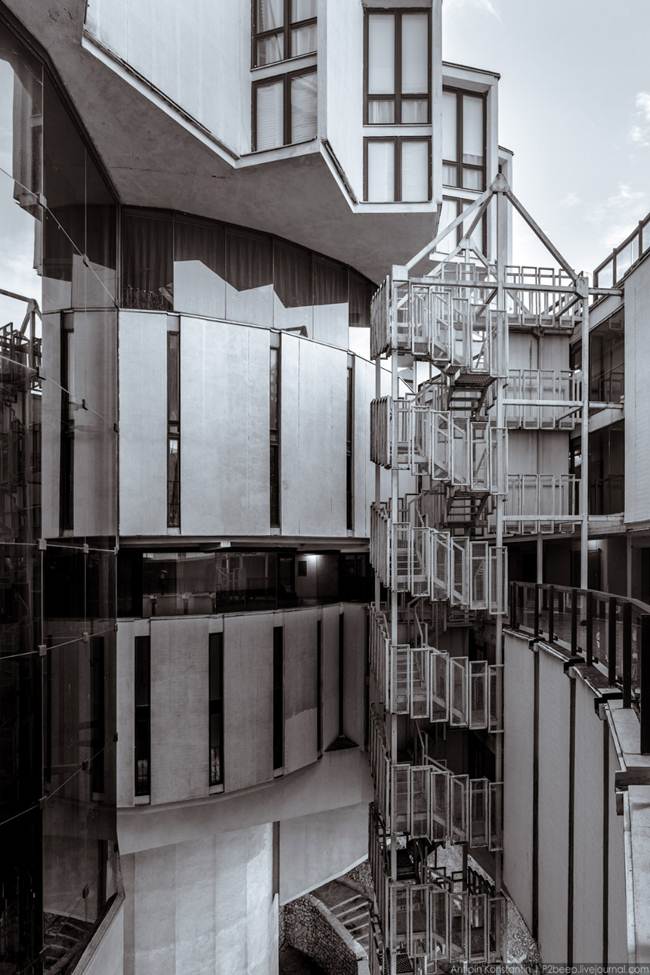 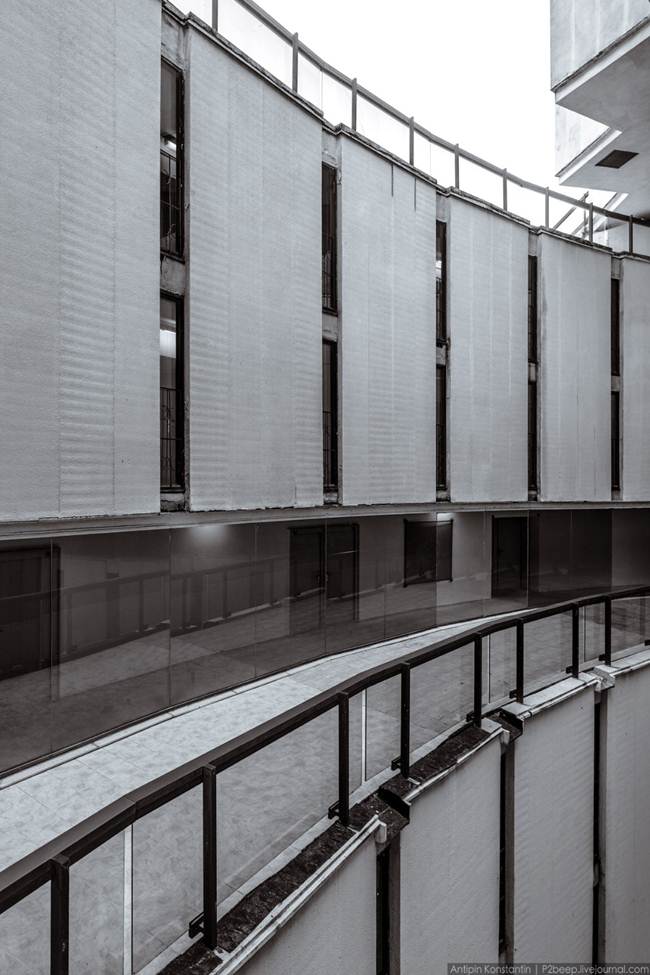 21. The corridors of the external circuit.

23. It is amazing how it all fit in such a small building. Inside does not feel stiff, on the contrary. The abundance of light and glass as if pushing the space.

24. To enter the sea by elevator or stairs, located in the nearest to the beach support.

25. The base of the atrium does not look. This basin bowl.

26. Over the past 30 years after opening, the building has not been subjected to any influences from the human, partly because there are no walls that can be migrated, rebuild, they are structurally incorporated into the work. Nevertheless, the building is in need of repair. 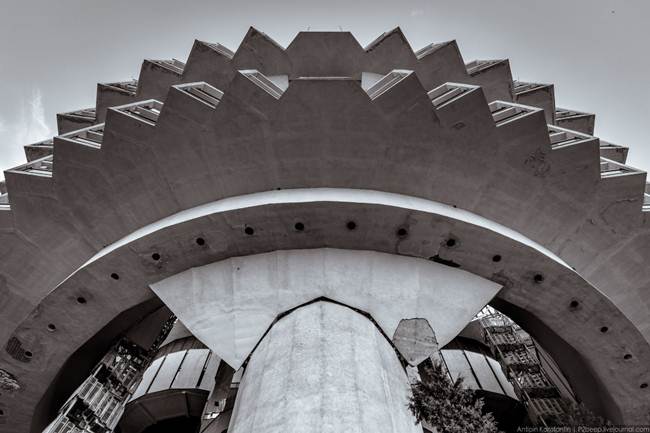 27. You look at the building from the bottom, and it seems that he was in the clock mechanism. Grease – all moves …

28. The worst thing that spoiled beach strip. Two-story “sheds” and additional housing overlay view of the building with low points.

29. Now it is part of the sanatorium “Kurpaty”. Located 8 km from the center of Yalta.

30. Sanatorium “Kurpaty” or a flying saucer in the Crimea.